It’s a very common problem to, out of the blue, start to get lots and lots of ‘mail delivery failure’ type emails but unfortunately there’s not a lot we can do to stop this. 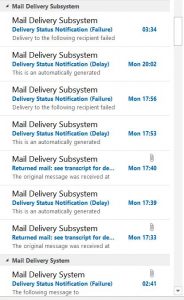 When spammers send out their spam emails they need to pretend these emails are from a legitimate source otherwise they won’t be successfully delivered. Every email has certain information extra attached to it such as a sender address so you know who it’s from. Spammers will fake this information to make sure the emails get through spam filters so if you’re suddenly receiving a lot of ‘mail delivery failure’ messages, there’s a very good chance someone is sending out spam emails pretending to come from your email address.

The good news is it’s probably nothing personal, it’s unlikely to affect your domain adversely in the long-term, and the problem normally tails off after a week or two

From my experience, the problem usually spikes within the first week and only lasts about 2 or 3 weeks in total.

The best way to understand why this happens, in my opinion, is to think about it like this:

Imagine if Jim didn’t want to receive a letter in the post from Bob but Bob wanted to send a letter to Jim anyway. If, when Bob puts his letter to Jim in the post, he puts the ‘sender’ address on the back of the envelope as someone else other than himself, Jim wouldn’t know the letter was from Bob until he actually received it and opened it.

Just like a letter you receive in the post, emails also have a ‘sender’ address that can be ‘faked’ or ‘spoofed.’

In the example above, Bob is the email spammer – he wants to send emails to Jim (and millions more) about things like fake watches and pharmaceuticals – but his emails would be easily caught by spam filters because Bob is a known spammer. Jim, on the other hand, is just one of millions of random recipients. And the sender address on the back of the ‘envelope’ is yours because you’re not a known spammer so emails from you pass easily through the spam filter… although it could actually be anybody’s address used as the ‘sender’

So, here is why you’re getting so many ‘Undeliverable Email’ Notifications:

So, the bad news is that there is no way we can talk to Bob directly to ask him nicely to not use your email address as the ‘sender’ address

The good news is that it’s nothing personal, there shouldn’t be any long-term damage to your domain name, and the problem should naturally stop after a few weeks all by itself

Share this ArticleLike this article? Email it to a friend!
Email sent!